Financial Procurement in the age of disruption 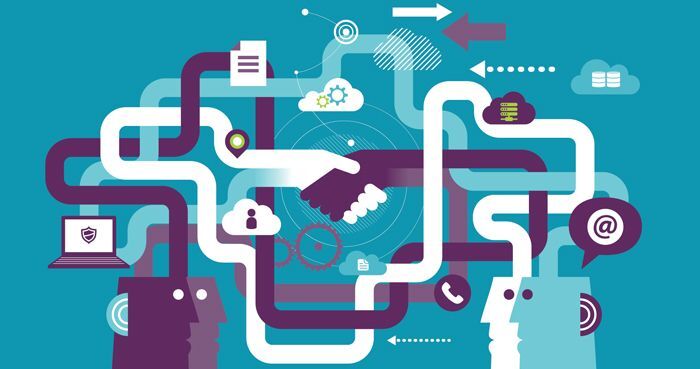 Attitudes around bank’s spending on professional services have changed in recent years. Jason McIntosh examines how internal Procurement can up its role as a value creator.

Investment in staff, services and technology ballooned across the financial sector during the 1990s and early 2000s. For many years, booming revenues and high margins meant that technology and infrastructure costs could largely be ignored.

It is no surprise that since 2008 things have changed. The combined pressures of increased regulation, a low interest rate environment and technology disruption have challenged existing business models and forced a change in thinking.

The organisations Riskcare has worked with in the decade since have adopted a wide variety of approaches when it comes to this challenge. These strategies have also varied enormously in terms of their effectiveness in delivering long-term value.

Before we discuss the approaches, perhaps it’s worth recapping how we got to where we are now. Following de-regulation in the late 1980s, the financial sector started to boom. Margins were high, business plentiful and competition intense. Product lines were highly segmented with key individuals controlling client relationships and exercising significant control in each domain.

Since these so-called ‘rainmakers’ could move to another employer and take their business with them, they had huge negotiating power when it came to salaries and technology. This resulted in a proliferation of systems within each bank, inflated Front Office staff costs and a lack of internal cooperation.

Throughout the 1990s the banks continued to enjoy high levels of growth and consolidation – resulting in their becoming much larger and more complex organisations. Despite this, and the increasingly global and cross-asset nature of their operations, Front Office was still generally segmented by product line, with business heads exercising high levels of control.

Margins remained high and cost could be thought of on two levels; firstly the primary cost of doing business – namely cost of capital and Front Office – and secondly the cost of supporting infrastructure and technology. The priority was to win market at all costs, regardless of background expense. As a result, while some support functions were centralised or outsourced, front and middle office technology remained fragmented and suppliers enjoyed relatively little pressure on rates.

This scenario was fine while the good times lasted, but following the crises of 1998 and 2000 worries about systemic risk resulted in an inevitable host of new regulatory requirements.

The majority of banks now had between 15 and 20 years of legacy technology and data – much of it specific to individual business lines and in some cases inherited from multiple organisations. Centralised functions also faced an uphill struggle when it came to trying to enforce standardised calculations across Front Office.

The result for many organisations was inefficiency and spiralling costs, as well as growing reliance on the services sector to help sort the mess out.

During the years following 2008, cost became more of a priority. New regulations raised capital requirements, while limiting proprietary activity and at the same time competition was driving margins down. Cost quickly became an issue in terms of sustaining both Front Office (capital and people) and a competitive technology platform.

The first step towards redressing this was to reduce unproductive uses of capital. Non-core business lines and geographies were closed down, capital strengthened and exposures reduced. Although while this helped shore up balance sheets there was still the challenge of how to recover margins.

It was becoming increasingly clear the boom days were not likely to return and the prospect of technology disruption was becoming progressively more likely. The obvious next step was to introduce a value agenda from the top down.

For most banks this meant the introduction of comprehensive programmes of cost reduction – including trying to label costs at source (see: https://www.riskcare.com/insights/services/modeltco-reducing-waste-financial-analytics), eliminate waste and select only those projects satisfying the set hurdles in terms of expected return.

The other challenge was supplier cost and, unsurprisingly over the past few years, we’ve seen the banks trying to catch up with other industries in professionalising purchasing. As a result, there has been an evolution amongst both bank and suppliers – as both sides have adapted to a more structured buying process.

Initially progress was slow (as can be seen in the chart below) and op-ex across the sector actually continued to increase up to 2014. While banks were keen to reduce expenditure during that period, they had to focus significant resources on complying with new regulations. Since 2015, however, the pace of new regulation has finally slowed and we are now seeing a net Opex reduction.

While this is great, there is undoubtedly still a high level of waste across the sector – particularly within ‘full coverage’ organisations where it has been estimated that over 80% of internal functions are duplicated.

We don’t yet know whether this will force the industry to completely restructure. In the meantime, banks are naturally continuing to focus on eliminating overlaps, consolidating systems and outsourcing non-core functions. 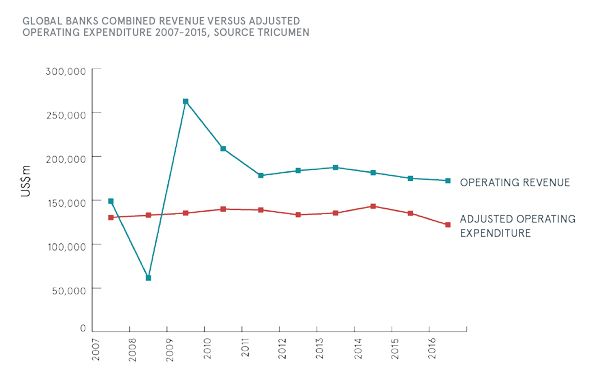 Once Procurement started to become a recognised function it was a natural progression for it to take a more central role when it came to professional services. While this was initially all about cost and volume, many organisations have since started to realise the benefits of a more nuanced and collaborative approach.

In the model below, financial professional services procurement is mapped against a maturity scale – where the top represents a mature style based on long-term value generation, and the bottom, a short-term cost-driven approach.

While entirely rates-based negotiation is useful to cut obvious waste and price gouging, it overlooks less obvious, but important, aspects of value generation – such as reliability, total cost and contribution towards wider programmes of work.

It is also important to note that moving up the scale isn’t a substitute for robust negotiation – it just means that value is explored, discovered and exchanged across a wider range of dimensions. The supplier is then chosen depending on where value can be realised in a particular situation.

To view the full article, please click the link below.